Posted at 18:50h in English by Roberto Venegas 1 Comment

Muscle injuries are one of the big factors that cause problems in soccer. In Spanish football, muscle injuries cause a season loss of 267.2 days per team. Of those days, 76.2 are low for rectus femoris injuries. It is the muscle injury that causes more days off than any other in football. (Noya & Sillero, 2012)

Tears of the rectus femoris are caused by a forced contraction of the muscle against excessive resistance when jumping, kicking a ball, or changes in speed and direction. (García et al., 2012). At the moment of the injury, the player gets a lot of pain (a pinch) that leads him to stop. (Mendiguchia et al., 2013).

This type of injury can occur due to different factors that must be improved and analyzed with the help of a strength and rehabilitation coach. (Ekstrand & Gillquist, 1982) demonstrated that the low elasticity of the quadriceps is a factor that puts the player at risk. (Bradley & Portas, 2007) affirmed this theory, showing that the soccer player who has limited hip mobility has twice the risk of injury, including a rupture of the rectus femoris, but that there are also other factors that affect such as: previous injuries, morphology , muscle imbalances and deficiency in basic movements of the physical preparation.

(Ekstrand, Hägglund, & Waldén, 2011) indicate that most muscle injuries occur without contact, and that it is more frequent in acceleration, braking and falling movements. They also demonstrated that 60% of quadriceps injuries are in the dominant leg and that 33% occur on the non-dominant leg. This means that strength and rehab caoch must focus on improving the bases of physical preparation, where it will improve imbalances and deficiencies that the soccer player presents.

The rectus femoris is the only quadriceps muscle that originates from the hip, to be exact, from the lower anterior iliac spine. (Mendiguchia et al., 2013). Due to its origin, its function is to be a hip flexor and to stabilize the pelvis (Hasselman et al., 1995). The hip as well as the knee are not only affected by the quadriceps. The hamstrings are an important factor for the stability of both joints. The relation between quadriceps and hamstrings must have a good symmetry to reduce injuries in some muscular tissue or in some structure of the hip and knee (Thomas et al., 2010). (Cursino et al., 2018) also highlight the need to have a positive ratio between the hamstrings and quadriceps and more when the quadriceps can apply three times the amount of force that the hamstrings, but it will depend on the gesture or exercise to be practiced. Depending on what position and at what angle the hip is placed movement will affect the activation of the hamstrings and quadriceps differently, which defines that, if there is little joint mobility or muscle deficiencies, the risk of injury is greater since there may be different compensations and a deficiency in muscle activation. (Thomas et al., 2010). (Small et al., 2009) mention that the shortening of the rectus femoris increases the load on the hamstrings, which increases the risk of injury. This is also vice versa, as both muscle groups are affected be each other. (Young et al., 2004) highlight that in soccer, the more mobility the hip has the more force can be applied when kicking a ball, and the hip flexors would have a lower risk of injury. In addition to poor mobility, fatigue can be another factor that increases the risk of injury. (Small et al., 2009) demonstrated that fatigue in the hamstrings and quadriceps can cause poor posture of the hip or knee (especially in single leg actions) and can cause joint or muscle damage. Therefore, the importance of the glutes, the largest muscle group in the body, must not be forgotten, which contributes to the stabilization of various structures (Bartlett et al., 2014).

The glutes consist of three muscles:

Muscle injuries are differentiated by the degree of severity:

The most frequent strains are not complete tears, but partial tears in muscle tissue (Millar, 1979).

When there is a muscle tear, there is a change in the general structure of the tissue due to forced elongation and, normally, they occur at the junction of the muscle and tendon (Järvinen et al., 2005). When this injury happens, the recovery process begins, which has three phases:

An ultrasound or MRI can be used to diagnose muscle injury (Järvinen et al., 2005) (Mueller-Wohlfahrt et al., 2013). An MRI would be ideal, but for economic and availability reasons its use can be complicated; the ultrasound would be the other option, especially if the rupture is more superficial, and its use as a first diagnosis is preferred. Then if more research is required because something is not clear, an MRIwould be the option (Järvinen et al., 2005 ).

The Career in Soccer and Rupture in the Rectus Femoris

In soccer, the players cover an average distance of 9 and 15 kilometers. and its rhythm varies between 1.4 and 10 meters / second, 800 to 1000 times during a match. (Andrzejewski et al., 2013). While running, the mechanism of injury to the rectus femoris normally occurs during the early swing phase, in which the hip muscles generate force at the same time as the knee extensor muscles generate energy through eccentric contraction. . (Mendiguchia et al., 2013). During high-speed gestures, the rectus femoris lengthens to slow down the tibia as the knee flexes, making the anterior rectum more prone to injury (Mendiguchia et al., 2013). Improving running technique is ideal for the footballer, since if these movement patterns are improved (and the muscles are strengthened) the risk of injury is less.

2.9 Intrinsic and Extrinsic Factors of Injury

During the rehab of a player it is necessary to know that the risks increase when having a tear or injury to the rectus femoris. It must be understood that an injury tends to be multifactorial, this does not mean that because that factor exists, the athlete is injured, but rather that the risk of injury is greater (Hägglund, Waldén, & Ekstrand, 2013). 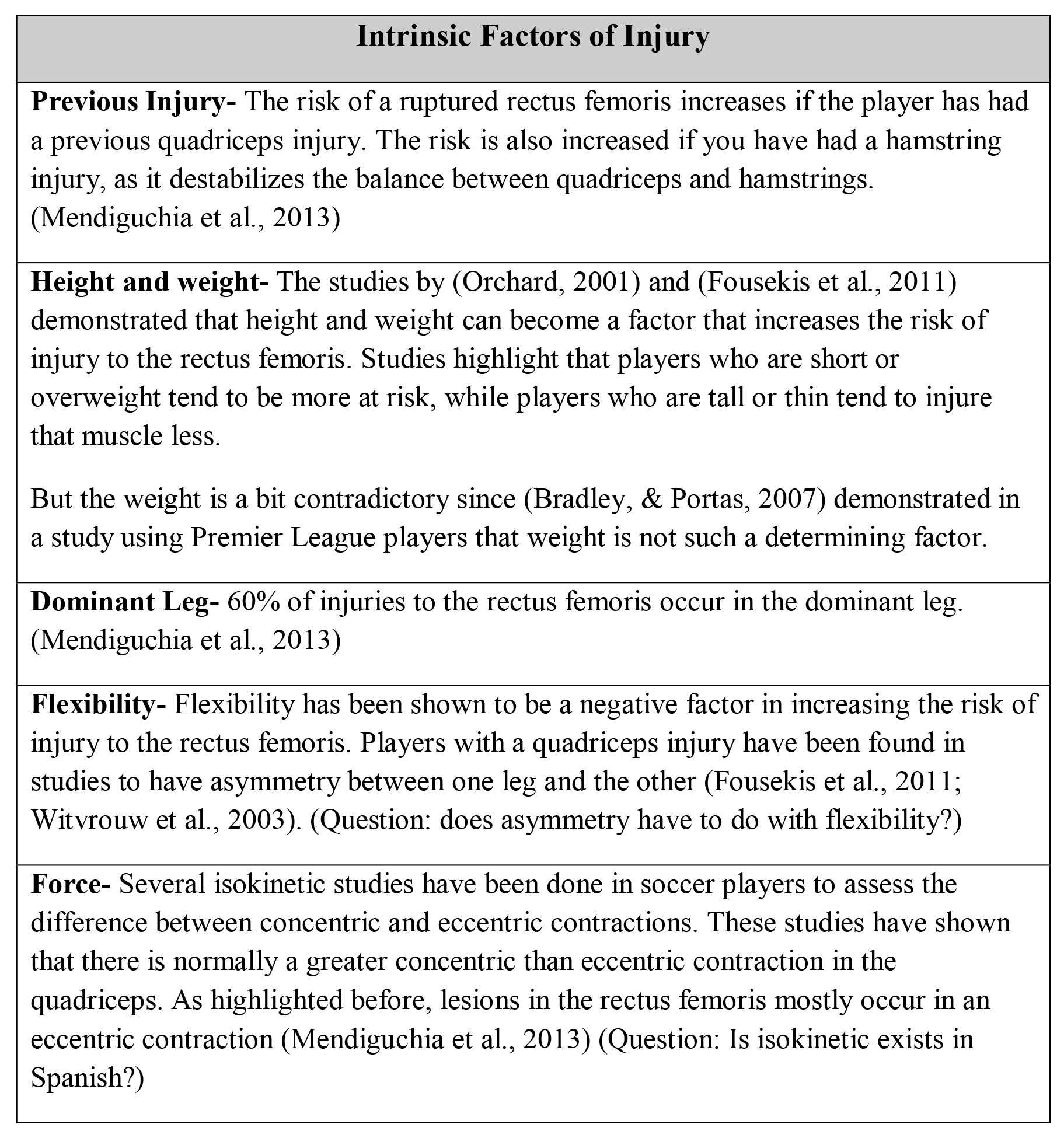